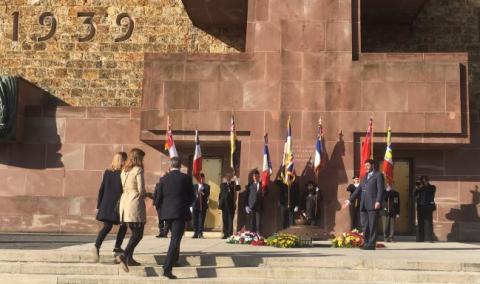 On Saturday 29th September the British Section was honoured to take part in the commemoration of the Special Operations Executive’s (SOE) role in the French Resistance at Le Mont Valérien, the national memorial to the French Resistance. In the company of the British Ambassador to France, Sir Edward Llewellyn, British Section students laid a wreath at the memorial as part of the first ceremony open to non-French nationals at this “Haut lieu de la Mémoire Nationale” to remember the role played by SOE agents and the local resistance fighters. Organised by the Office national des anciens combattants et victimes de guerre, which looks after the memorial, and the Mairie of Suresnes, the ceremony was attended by representatives from the British Embassy, the British Legion and Libre Resistance, the Anglo-French association that represents the 429 F-Section Special Operations Executive agents infiltrated into France during the Nazi occupation as well as the over 70,000 local resistant fighters who prepared for the allied invasion from 1941 and helped to liberate France in 1944.